The positioning of dishes at a Japanese table is based on a set of rules that have been handed down from generation to generation. The base of the serving menu is “ippiru sansai,” which consists of rice and soup (sometimes with pickles), a main dish, and two side dishes, which is the basic menu of Japanese food. 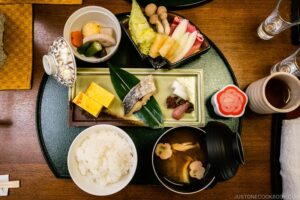 Side dish: savory and dressed vegetables (in the middle)

When serving sake, place the sake in the position of the rice bowl, as rice is served later. When serving Japanese food to left-handed people, only the direction of chopsticks is reversed.

Not only Japanese food, it is good manners to eat meals in order from the least flavorful to the most flavorful. This is because it is difficult to appreciate the delicate flavors and seasonings if you start with the more flavorful dishes first. Main dishes should be served later, and warm soup should be served first. Next, eat rice, main dishes, and side dishes in this order.

Chopsticks are an indispensable part of eating in Japan, and are one of the areas where etiquette during a meal is often a concern. It is important to understand how to hold and use chopsticks correctly.

Be careful not to use chopsticks incorrectly.

Chopstick use that gives an unclean or offensive impression to those who share a meal with you is called “kiraibashi. It is bad manners to use chopsticks during a meal. Here are some examples of “kiraibashi” chopsticks.

– Nigiri chopsticks: Holding the chopsticks as if grasping them tightly.

– Stabbing chopsticks: Eating by sticking the chopsticks into the food.

– Stray chopsticks: Moving the chopsticks while holding them, wondering which dish to eat.

– Yose-chopsticks: Pulling a bowl toward you with chopsticks

– Handing over chopsticks: Placing chopsticks on a small plate or bowl during a meal.

– Neburi chopsticks: Putting the chopstick tips in the mouth and licking off the remaining food.

Proper etiquette also applies to plates, oshibori (hand towels), and other items that are indispensable during a meal. It is important to review the correct manners, as you may unknowingly remember them incorrectly.

Plates should not be stacked on top of each other.

– Do not return uneaten food to the plate.

It is not acceptable to return food that has been brought to the mouth and is about to be eaten back to the plate. Since the appearance of uneaten food may show teeth marks or chew marks, it is best to cut the food into portions that can be eaten in one bite before bringing it to the mouth.

– Do not stack plates after eating.

Some people stack plates on top of each other when they are finished eating because they think it will be easier for the waiter to carry them away, but this is also bad manners. It is proper etiquette to leave the plates as they are, as stacking them spreads dirt and stains the table.

Although not a plate, it is also bad manners to use the palm of the hand as a plate to prevent spillage when carrying food with chopsticks. Although it may seem elegant at first glance, small plates the size of the palm of your hand are acceptable to hold and eat with in Japanese cuisine. A small plate of soy sauce, for example, should be held close to the mouth to prevent the soy sauce from falling out after the food has been dipped.

Hand towels are for wiping hands.

A hand towel is used to cleanse the hands, not for any other purpose. It should not be used to wipe one’s face, nor should it be used to wipe tables. Take the oshibori with your right hand and switch it to your left, open it and wipe your hands with it, then fold the used part inside and put it where it belongs. 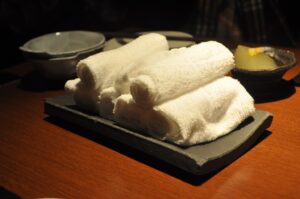 Put the lid of the bowl back on.

The correct position of the lid after finishing the soup is to put it back on. It should not be placed upside down. Also, if the bowl cannot be opened by any means, turn the lid in the shape of a circle to open it smoothly.

So far, we have explained the etiquette for kaiseki cuisine, which is based on one soup and three dishes, but kaiseki cuisine and sushi also have their own dining manners.

In kaiseki cuisine, each dish is served in turn, like a course meal. Generally, appetizers are served as snacks to savor the sake, followed by simmered dishes, sashimi, grilled dishes, and finally rice and soup. The rule of thumb is to eat sashimi, which is often served in kaiseki cuisine, in order from the left side, and grilled dishes little by little from the left side. If an item is too large, use chopsticks to cut it into bite-sized pieces before eating.

When eating sushi, the first question that may cross your mind is whether to eat it with your hands or with chopsticks. Basically, sushi should be eaten with the hands, but it is not against manners to use chopsticks. However, when eating gari, be sure to use chopsticks. When dipping sushi in soy sauce, dip the rice in the soy sauce to prevent the rice from falling apart in the soy sauce dish. In the case of gunkanmaki, one of the official ways to eat gari is to drizzle soy sauce dipped in gari onto the neta.

Tempura may be served in an assortment or freshly fried one by one in turn. In the case of an assortment, eat the tempura in order, starting from the front, so as not to ruin the arrangement. Take the tempura off the plate before eating. If it is too large, you may cut it into pieces that are easier to eat. If there are two kinds of tempura, one with tempura sauce and the other with salt, it does not matter which one you start with. If salt is chosen, pick up only the necessary amount of salt with your hands and sprinkle it over the tempura.

With the decrease in the number of Japanese-style rooms in modern homes, many people may not know how to open and close fusuma (sliding doors), walk on tatami mats, or use a zabuton (Japanese cushion). The following three manners should be kept in mind when using a Japanese-style room.

Do not step on tatami mat edges or thresholds

In the past, the pattern and design of tatami’s edges were determined by the status of the room’s owner. Since some shrines, temples, and samurai families put their family crests on the edges, it is said that one should not step on them out of respect for the other person. In the same way, stepping on a threshold is considered to be the same as neglecting the people of the house. When opening a fusuma (sliding door) or shoji (paper sliding door) to enter a room, be careful not to step on the threshold or the edge of the tatami mat.

Do not sit on a cushion until you are asked to do so.

Do not sit on a zabuton without permission. Once you are seated on the lower side of the cushion and greet the guests, wait until you are prompted by the person who has invited you. The position of the zabuton is an indication of the other party’s intention to have you sit here. Do not pull the cushion closer or move it to a position of your choice, but sit as you are.

Do not enter the room with bare feet. 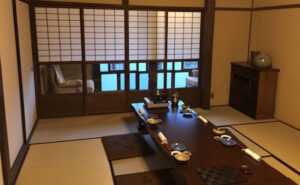