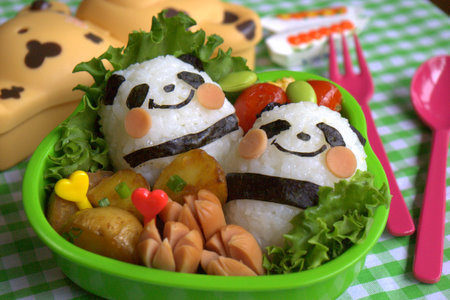 The Japanese bento box has been gaining attention overseas of late. There are actually many different types of bento box, and some well known examples include the luxury bento boxes produced by luxury hotels and restaurants, healthy bento boxes that boast a nutritional balance, diet bento boxes that are low in calories, and homemade bento boxes.

Paying attention to overall balance while deciding what ingredients and seasoning to include in a bento box is a unique aspect of Japanese culture. Recently, “character bento boxes” featuring popular characters from anime productions and animals have become popular, and the world now has an increasing number of fans of this example of food culture that typifies Japan.

Japan’s bento box culture started around 1,200 years ago, and the original form of the bento box can be found in the tiered picnic box that was created to enable noble persons to enjoy lunch outdoors when they went to view cherry blossom or autumn leaves.

Bento boxes were also supplied during intervals in the age-old traditional Japanese performance arts of kabuki and no, and gained popularity as an aspect of such performances that provided excitement for audience members. Bento boxes like these are actually still provided at the Kabukiza Theater and other theaters to this day.

When Japan opened up to the outside world around 100 years ago, the country’s culinary culture began to change greatly with the incorporation of a range of different ingredients into bento boxes, while much attention was given to making them even more aesthetically pleasing and developing the best seasonings.

This is how bento boxes evolved, and recent years have seen an increase in “character bento boxes”, “art bento boxes”, and other such creations that go beyond the original concept of what a bento box is.

Japan’s bento boxes are works of art. Ideas are incorporated into their production to ensure that when the box is opened, the appearance and flavor of the food can be enjoyed to the maximum.

The reason that Japanese people pay a lot of attention to the way the different types of food are packed into the boxes is not only to ensure a beautiful appearance, but also to ensure that items with different flavors do not become mixed together. As bento boxes contain seasoned food that is prepared using a suitable method for the ingredients, if flavors mix then it is no longer possible to enjoy them as they are intended.

Attention is also paid to color and positioning in order to enable people to enjoy the visual appeal of their bento box, and bento boxes are sometimes separated into several levels with each level given a different theme to excite the people who eat them. Taking the people who will eat them into consideration is deemed to be very important when it comes to Japan’s bento boxes.

Character bento boxes make people feel excited, and that it would be a shame to eat them because they look so nice. Bento boxes featuring well-executed depiction of anime characters and animals loved by people of all age groups have become very popular, and have brought a new element of entertainment to bento box culture.

The spur for the increase in the popularity of bento boxes outside of Japan came when Japan’s bento box style began to be used in Paris, France, and when there was a character bento box exhibit at the Milan Expo in Italy. The greatest appeal of character bento boxes is that they have a large visual impact and are entirely edible,
and pictures of them are now posted on Instagram and Twitter and viewed around the world.

While different countries around the world may have their own equivalent to bento box culture, Japan’s bento boxes are special in the way that they incorporate intricate beauty, good nutritional balance, and uniqueness.

All bento boxes are made by hand, and no two are the same. This feeling of specialness is the reason that bento box culture has continued for so long, and is perhaps the reason that it is gaining attention around the world.