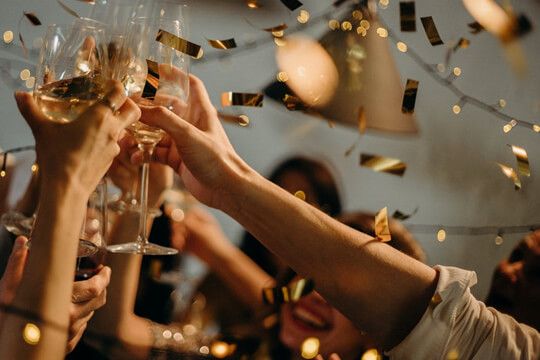 Alcoholic beverages are essential when it comes to social gatherings such as meals with friends and weddings. And in these situations, one almost always sees people raising their glasses in a toast.

Japan has always incorporated alcoholic beverages such as sake in Shinto religious rituals, but did you know that the style of toast now common in Japan is a copy of the European way of making a toast?

Here we will take a look at the roots and the meaning of kanpai – or “cheers” in Japanese. You may find that by comparing it with the meaning of toasts in Europe, you come to enjoy a kanpai that little bit more.

The origin of Japan’s tradition of toasting

In those days, Japan was a closed country that didn’t allow interactions with foreign countries and international relations were only permitted with certain countries as special exceptions, but Western culture quickly spread after the country opened up a few years later in 1858. During this course of events, the Western style of toasting also became common.

The meaning of European style toasts

While the roots of toasts in Japan can be found in Great Britain, making toasts in ancient Europe is thought to have started as part of a religious ritual in which people drank alcoholic beverages for the gods and the dead.

In the middle ages, it is thought that it was also performed to dispel evil spirits. People thought that evil spirits resided in alcoholic beverages, and they would dispel these spirits with a toast so as not to be possessed by them.

As well as this, it is also said that performing toasts forcefully enough to make drops of beverages fly out of one’s own cup and into that of another person was a way of showing that one had not put poison in the other person’s drink.

The meaning of kanpai in Japan

While Western-style toasts came to Japan in modern times, Japan did have its own toasts prior to that. Japan also had a toast that formed a religious ritual in which people drank sake for the gods and the dead.

Sake was thought of as a drink to be proffered to the gods, and the sake consumed in banquets after Shinto rituals had the meaning of drinking the same thing as the gods, or in other words, becoming one with the gods.

These days it is common to see people at casual drinking sessions with close friends using beer as their first drink to make a toast, but toasts at important banquets and rituals are still performed using sake to this day.

The meaning and rules of toasts these days

The religious significance of the toast has faded these days, and it now generally marks the official start of a gathering.

While there are a few subtle rules involved when doing toasts, there is one particular rule unique to the Japanese kanpai that is always good to know: when doing a toast with a superior, you should always make sure to clink the glasses together with your glass slightly lower than theirs.

There aren’t many people these days who are that fussy about rules, but this particular rule is sometimes applied even at casual drinking sessions. When drinking with a Japanese person, following this rule says to your counterpart I respect you, and helps you to build a good relationship with them.

The modern way of toasting in Japan traces its roots back to Europe, but it has become so much a part of Japanese culture that there are many people in Japan who have no idea that it originally came from Europe. In izakaya and other places where people drink, you can hear voices saying “kanpai” from every direction.

When you are looking after a Japanese friend or a guest from Japan, they will very likely be thrilled if you do a traditional kanpai with sake. Of course, even if there are no Japanese people with you, you may still be able to enjoy a different atmosphere if you do a kanpai with sake when drinking with your own family or friends, or with other important people.