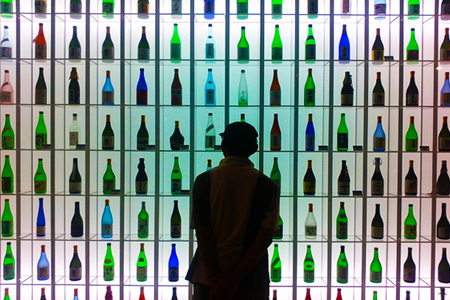 Did you know that the history of sake, which is consumed not only in Japan but around the world, stretches back 3,000 years into the past? Sake, or nihonshu as it is known in Japan, is a beverage with a long history indeed.
This article provides an introduction to the origin of sake, a history of the ways in which it has been consumed, and an explanation of the changes it has undergone up to the present day. By learning about the history of sake, you will find a new depth to its flavor.

What is the origin of sake?

It could be argued that the history of sake is the history of rice culture itself. The cultivation of rice reached Kyushu (in western Japan) around 3,000 years ago and subsequently spread to the rest of the country, and it is thought that alcoholic drinks made from rice began to be produced at this time.

The origin of sake can be found in something called kuchikamizake, meaning ‘mouth-chewed sake’. When rice is heated and then thoroughly chewed, the enzymes in a person’s saliva cause saccharification in the rice and it becomes sake. 3,000 years ago, kuchikamizake was a beverage produced as an offering to the gods, and only priestesses at shrines were permitted to produce it.

It was 1,300 years ago that a brewing method using rice malt began to spread, and planned production of sake overseen by a special government office called Sake-no-Tsukasa began. The methods of producing sake employed by different groups of people in different areas began to mix with the techniques used in the official government-produced sake, and this resulted in a variety of flavors of sake being produced around Japan.

The history of how sake has been consumed

The official government-produced sake of around 1,300 years ago was mainly produced for religious events and for the enjoyment of the aristocracy, but around 800 years ago, commoners also began to make sake and it became a drink that was consumed by the masses. It was around the time commoners began to drink sake that its consumption went beyond religious events, marriages, funerals, and celebrations to become a part of everyday life.

The introduction of a tax on sake

A tax on sake was first introduced around 680 years ago. The government of the day viewed stores selling sake as an extremely important source of income, and imposed a tax on it. Tax has been levied on sake throughout all eras since then, and it has always been treated as a source of finance for the national government.

The sake tax was revised and increased many times in the modern era from 1871 onward,
yet sake continued to be produced and consumed by many people no matter how high the tax. As a result of this, the national government’s tax income between 1868 and 1926 was comprised to a large extent from income on tax levied on sake, and this contributed greatly to the cost of the Sino-Japanese War and the Russo-Japanese War.

A modern history of sake

Sake production returns all around Japan after the war

Many restrictions were placed on the production of sake during World War II, but with the economic democratization measures enacted by GHQ after the war, the controls that had been placed on alcoholic beverages were lifted in May of 1949. In July of the same year, sake producers were able to freely ship and sell sake, and with a reduction in tax that was implemented through the Liquor Tax Act in 1953, the sake producers who had gone out of business during the war gradually made a comeback and sake began to be made all around Japan once again.

The intergenerational evolution of sake

The 1980s brought a further increase in the quality of sake, and provided the spark for a massive increase in the popularity of junmaishu and ginjoshu.
The way in which sake is consumed also changed greatly with the spread of household refrigerators. In the days when refrigerators were not common, there were, broadly speaking, two ways of drinking sake: heated and at room temperature. But the spread of refrigerators brought with it a new way of enjoying sake by chilling it prior to consumption.

One of the characteristics of sake is that its flavor changes with temperature, and heating it allows one to enjoy a dry taste while chilled sake has a sweeter flavor.
Nowadays, many people choose a method of consumption to suit their preferences, and the fact that there are a variety of ways to enjoy it is one of the things that makes sake so appealing.

This article provided a brief summary of the history of sake. Created as a sacred product around 3,000 years ago, sake has gone from being a beverage enjoyed by the aristocracy to one enjoyed by the public in general, and with the improvement in flavor brought by technological development it is now loved by many. And now that you also know about the history of sake, you might find that you enjoy it just that little bit more.