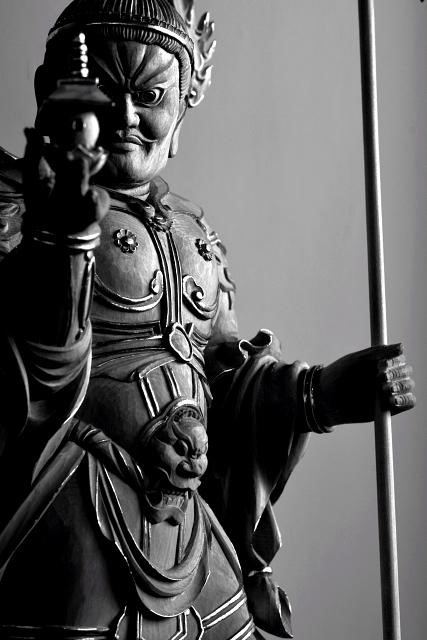 What kind of god is “Bishamon”?

The “Bishamon” from Bishamon Group originates from the Buddhist deity known as “Bishamon-ten” in Japanese. The deity is recognized in Japanese culture as a protector of Japanese shrines and temples and even depicted in popular culture such as video games.

Also known as Vaiśravaṇa, the name originates from the Sanskrit proper name Viśravaṇa, and is the father of Kubera the Lord of Wealth. Translated to Bisharamon (毘舎羅門) in Japanese, the name evolved into what it is known today as Bishamon.

Traditionally, the deity is depicted as an armored warrior as a protector of Buddhist teachings. The warrior is portrayed wielding a spear in its right hand and a pagoda in its left hand, and at times portrayed standing on top of a demon.

The Four Heavenly Kings and Bishamon-Ten

The Four Heavenly Kings are the four Buddhist gods known as protectors of the world and fighters of evil. The four gods Dhṛtarāṣṭra, Virūpākṣa, Virūḍhaka, and Vaiśravaṇa protect the compass points, or cardinal points, and Bishamon is the protector of the north point.

On its own, Bishamon-Ten is commonly referred to as Tamon-ten (“listening to many teachings”). The name is thought to have originated from Vaiśravaṇa (Bishamon-Ten), believed to hearing the most of Buddha’s teachings of the four gods. 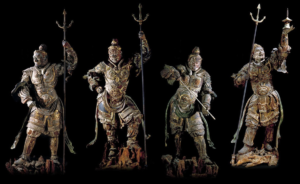 The Seven Lucky Gods” and “Bishamon-Ten” 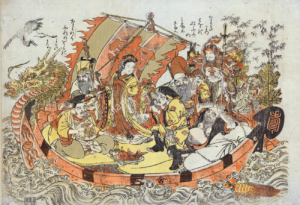 The Seven Lucky Gods are the most commonly worshipped gods of good luck in Japan.

The origin of these gods derive from various religions such as Hinduism, Buddhism, Taoism, and Shintoism.

It is said throughout history that the Seven Lucky gods existed in many religions and took on various shapes or forms. In modern times the most commonly known forms of these gods are Bisharmonten (毘沙門天), Ebisu(恵比寿), Jurojin(寿老人), Daikokuten(大黒天), Fukurokuju(福禄寿), Benten (弁財天), and Hotei(布袋). Out of these “Seven Lucky Gods” it is said that Daikokuten(大黒天), Bishamonten (毘沙門天) and  Benten (弁財天) are derived from the Indian gods, Fukurokuju(福禄寿), Hotei(布袋) and Jurojin(寿老人) are derived from the Chinese gods and Ebisu(恵比寿) was derived from the Japanese Gods. 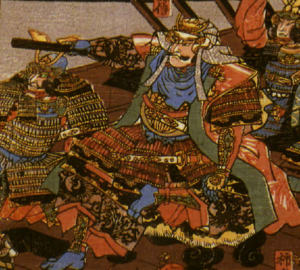 Kenshin Uesugi was heralded as the most powerful Japanese military commander (Daimyo) during his ruling in the Sengoku period. Believed to be the reincarnation of Vaiśravaṇa (Bishamon-Ten), Kenshin served the interest of his people rather than for his own self-interest and revered for his honourable conduct.